All amateurs these days probably have a transceiver equipped with some sort of spectrum scope. This means that signals are more visualized than they were more than 10 years ago. With more visualization, we all see how a person’s signal is sent and received by the receiving station. During the big Contests like WPX, CQWW, etc… we see big gun stations producing a lot of strong signals around the band. This is of course great because I strongly believe that the signal you are transmitting should be received by your opponent in such a way that he/she can have a good reading instead of putting his ears on the speaker box.

But sending these huge, big signals into the airwaves makes us forget more and more what effect it will have on your next door station trying to work some DX as well. So what causes one signal to be purer than the other…? Audio is of course one of the culprits, as having a very wide overcompressed audio resulting in audio clipping certainly doesn’t help. Therefore, I would advise people who are about to start broadcasting to do at least the following.

By clicking on the Blue Key words you will be re-routed to YouTube explanatory videos on how to set up proper the above mentioned topics.

All simple things to check before you start broadcasting, because unfortunately and speaking from experience people sometimes don’t even know how to set up their TBW or even; “…I’m just a guest operator of this Contest station and I’m not sure what the audio sounds like…” !

But could Audio be the only culprit causing the “Splatter of Signals” ? No, of course not, radios and amplifiers also cause splatter. Some radios are better than others and some amplifiers are better than others. Lately I notice that more and more professionally built amplifiers are not completely clean as the technical specifications show. Of course, as mentioned above, the combination of an incorrect setup of Audio with an amplifier that already has some weakness on clean signals can already result in the unwanted effect of Splatter.

With Screenshot 1 you see an example of a non clean signal. 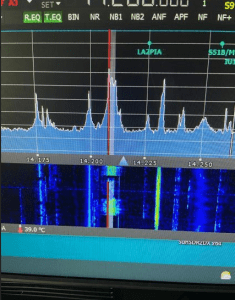 Within the spectrum range of screenshot 1 we see a received signal of 5/9+20db, with clear side skirts visible in the waterfall display. This station used an ACOM 1000 and a Yaesu FT-2000 transceiver. Although the activity on the band that day was quite low and there was no Contest. It still clearly shows how a broadcast signal can cause some splatter.

With Screenshot 2 you will see a similar strong signal of even 5/9+35db which clearly shows how clean a signal should be. 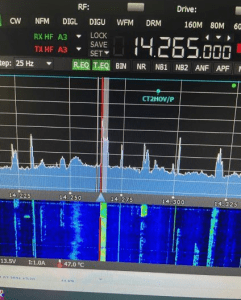 In this case, the station set up used was an RF-KIT RF2K-S amplifier and an ICOM 7851. The reason I know is that it was my signal received by a German station that I had a QSO with during one of the short skip openings on 20mtr.

Right now, some manufacturers are even taking it to the next level when it comes to clean signals. Think about the Apache labs ANAN 7000MKII transceiver or even the advanced and well designed 1kw HF amplifier the HILBERLING HPA-8000B which have the capability to do Pure signal

Conclusion: By reducing splatter on the band it helps to know in advance what you as an operator know, what kind of equipment you are using and do I fully understand how to operate and set up the equipment. Because in the end it all starts with ourselves by emitting a clean signal, leading to a cleaner, non-splattering HF band

I would also encourage you to read Rob Sherwood’s presentation on IMD and clipping.
https://www.slaarc.com/wp-content/uploads/2021/04/NC0B-SLAARC-1m.pdf

If you would like to  know more about this topic please do not hestitate to drop me an email at roma-dx@ziggo.nl or just use the CONTACT form on this webpage.