Almost 4 years ago I decided it was time to get serious and install a proper antenna tower on the side of my house. After discussing with the YL whether we wanted to move and upgrade to a more suitable location where I would have more space for my antennas and such. The verdict was passed when we decided to stay and do some redecorating in and around the house. This ended in a new kitchen and bathroom for the YL and I would start planning in getting a permit for a telescopic antenna tower. After going back and forth with the local city government for over 2 years, I finally got the permit.

By doing some due diligence beforehand about what kind of antenna tower I would like to have, my attention was drawn to the company Antennebouwwind. After contacting the owner Mr. Arjan Wind an appointment was made where all my wishes were discussed. The downside was that this company was 205 km (128 miles) away from my QTH and this meant that the meeting had to take place on a Saturday due to our day-to-day business. This was no problem at all …

After discussing my wishes and some technical feedback from Arjan, the decision was made to go for a 2 x 8 meter(2 x 24 Ft) Telecopic Crank-up Antenna Tower Assembly to be mounted on the side of my house. Fortunately the inner wall on the side of my house is 14 cm (6 in) reinforced concrete which meant that the antenne tower would be installed on a specially designed wall bracket – frame (see photo). And as this investment should last for decades to come it was decided besides cranking the tower down and up, it also should be able to lower the mast horizontally to perform antenna works and such. When placing the order, we discussed whether the winches should be electric or manual. I decided at the time that I would have 2 manual winches. On one hand because it significantly reduced the price and on the other hand for lowering the antenna tower horizontally this would happen maybe once a year. 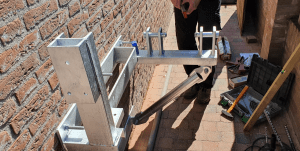 Antennatower in 45 degree angle before all antennas were installed

But oh boy…, how wrong I have been !!
In the beginning it is fun to crank the tower up and down. But after doing this manually for almost 1 year, I started to get annoyed. Even to the point where sometimes I was too lazy to do the same exercise over and over. So it was time for an upgrade…  After installing a Chinese Electric winch(400 kg) to see how it works, I was annoyed again because this whinch (not typically designed for this kind of operation) was too fast and loud when operating it . So the plan was made as I would place an order with Antennebouwwind for a real Electric Winch(500kg) with Frequency Converter to control speed, incline speed, etc… 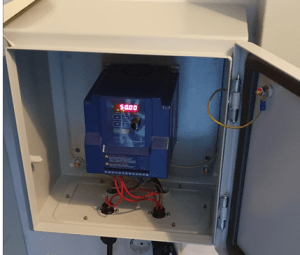 Two weeks ago Arjan came and installed the new electric winch . Beside installing the winch, he also installed the frequency converter which is mounted inside the house and a mechinal end switch in top on the tower to make sure a safety limit is implemented (see photos). 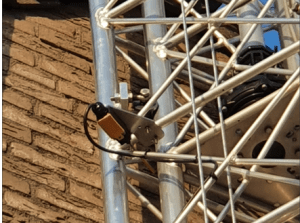 Conclusion: when choosing for a permanent situation where you want to have all comforts and ease in lowering, tilting and cranking up your antenna tower, please make sure you will consider all aspects beforehand. I was stupid enough to think I could save some money and at the same time use muscle power to raise and lower the tower….

If you would like to know more about this topic please do not hestitate to drop me an email at roma-dx@ziggo.nl or just use the CONTACT form on this webpage

Arjan climbing the tower to install the End switch